What are Pepper Balls?

Do you want me to tell you what pepper balls are? I know that most readers know about paintballs filled with paint, but when it comes to pepper balls, their minds start turning in circles. For that, they search on Google, asking numerous paintballers, but why that much tension if it is easy to understand.

Pepper balls are different from paintballs because they are filled with a powdered form of pepper that irritates them on contact with varying body parts. However, a question should come to mind: what is that powdered substance made of? It is basically a pelargonic acid vanillylamide (PAVA), a form of synthetic capsaicin, which bursts on impact. They are somehow similar to paintballs and are .68 calibre rounds, which are used not only by paintballers but also by police to disperse violent people. 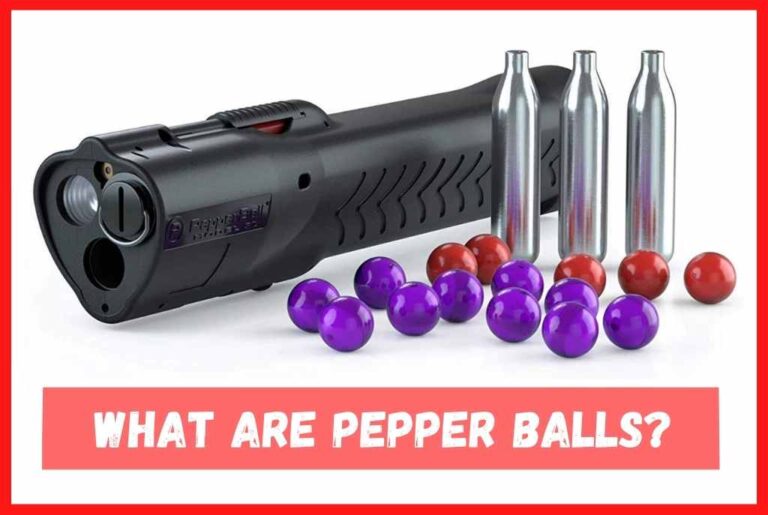 Furthermore, many new paintball players want to know about the downside of balls, whether they are hazardous to health or not.
Pepper Balls have proven to be highly effective as self-defence and household defence methods. They are very convenient and easy to store when they’re in use. It is not safe to keep other weapons to hand around the house, so Pepper Balls are a perfect choice.

Must Read: Can Paintball Break Glass?

If you would like to know more about what pepper balls are, please continue reading this article.

What are pepper balls?

According to the description above, pepper balls generally need to contain chilled powder. They can be fired at a distance of more than 150 feet with paintball markers, pistols, or other equipment just as a flashlight. It bursts when struck with objects or body parts, resulting in an explosion of a cloud of pepper powder that can irritate body parts, especially the eyes. Even though it is less harmful than pepper spray, keep in mind that it can still cause harm to your sensitive components, such as your eyes, nose, and other areas.

Most importantly, its effect remains under a 12 feet radius for 15 minutes; however, on the other hand, when it bursts in an open area, then its effect will not last for too long because its powder particles will get away by wind blow. So the information I mentioned would have made sure that the impact of pepper balls is directly connected with area size and whether it is confined or open.

Before going to the topic, first, let me share some additional information that pepper balls are not as effective as pistols for self-defence, but here I want to connect pepper balls with paintball games. Pepper balls work exceptionally well during paintball battles because they make your opponents irritated as soon as they think the pepper balls’ effect is bursting near them. Therefore, you can easily take your opponent out.

Nevertheless, the above information won’t be too much for you people so I want to explain some things about the substances called PAVA.

A Brief Overview of PAVA:

Thus, it should be clear that pepper balls do cause harm to body parts, specifically the eyes; however, when you are not under the 12-foot range, don’t worry. However, I have noted that many people have allergic reactions, which means when coming in contact with a cloud of pepper, a small Ances form on their skin, resulting in consulting a doctor.

Since I am prone to skin allergies due to my age, I would not want to come in contact with pepper powder at all. There is a possibility that you would be better off going for paintballing instead if you’re in that situation.

The most important thing that people want is to protect themselves from others’ attacks. This can be accomplished through self-defence.

There are various means of self-defence; some are pretty aggressive when done and can even take you to jail; however, some, like pepper balls, are not that violent when used for self-protection. When you fire pepper balls through paintball markers, it will burst and form a cloud of pepper chilled powder, so when this cloud gets into people’s eyes, it will compel them to close their eyes due to a burning sensation.

It is not done here; let me compare its effect with tear gas and pepper spray. Although, unlike tear gas or pepper spray, PAVA does not make you feel uncomfortable and has almost no destructive impact on the respiratory system. Furthermore, It is also worth mentioning that PAVA may induce a coughing reflex if you breathe too much inside its cloud or under its zone of discomfort.

Pepper Balls From a Paintball Gun?

Apart from the information mentioned above, this issue is the most important to be resolved. Because many new players, when initially hearing about pepper balls and paintball markers, usually get confused, and for that they go here and there to know about it. But I assure you that after reading this area of the article I hope it will be clear for them. You can shoot pepper balls through a paintball marker, but you need to make sure that your marker can fire paintballs measuring .68 calibre. The size of a pepper ball indeed is 0.68, so if you keep this fact in mind, it will make everything clear to you.

At the end of the article, I am sure you would be aware of the issue and would have understood what I said about the topic, Pepper balls? The problem is straightforward: it is paintballs filled with pepper powder and .68 calibre-size in measurement. If you know about these points, you can never confuse them with other paintballs.

I would be grateful if you could comment on the overall relevance of the above details.